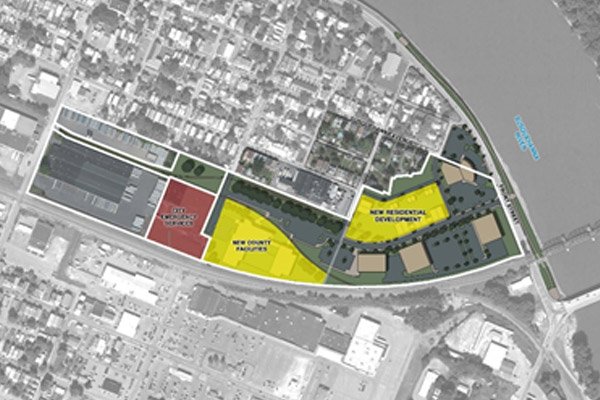 RMS personnel managed the environmental investigation of a 22-acre Brownfield Redevelopment Site located in the City of Sunbury, Northumberland County, Pennsylvania (site). The project was under oversight by the Pennsylvania Department of Environmental Protection (PADEP). The objective of the environmental investigations was to render portions of the property safe for residential and non-residential use under Pennsylvania’s Land Recycling Act (Act 2), Title 25, and Chapter 250. A portion of the site was planned to be redeveloped with a County Prison and another portion of the site was planned to be developed for future commercial use.

​Historic site use included a silk mill, a radio and surveillance technology manufacturer, and fiberboard manufacturer. Soil and railroad ties were also recycled at the site. Work performed at the site included:

Soil samples were biased to areas identified as RECs in previous Phase I ESAs and areas where contamination could exist from historical site operations. A total of 48 areas on the site were targeted and tested accordingly. At those locations, 145 potential contaminants were assessed. Of the 145 potential contaminants that were assessed, 96.5% were deemed safe. Five, however, exceeded the Act 2 Residential Use standards.

​RMS personnel developed a Cleanup Plan under Act 2 which used institutional controls (deed notice) and an engineered cap as the remedial measures for the site. A groundwater model for the site determined that impacted groundwater was not affecting the adjacent River. Therefore, a covenant was placed on groundwater use at the site. The planned remedy was an engineered cap consisting of asphalt, concrete and buildings and open areas that will be contained by a two-foot cap of clean soil and plant.

​Ensuring safety during demolition, air quality at the site and along the property boundary was continuously monitored and tested regularly to ensure the safety of the workers and the community. A buffer zone was maintained onsite so that if air tests indicate that air quality was compromised in any way, work could be ceased immediately before air migrates off the site. Dust onsite was controlled by spraying water or covered with tarp.

Performance of a geophysical investigation to locate buried metallic anomalies and vaults;

Excavation of test pits at locations where geophysical anomalies were identified;

Asbestos and lead based paint sampling and testing:

Management of fill materials and investigation derived waste: and,